The high-school Aline Mayrisch offers three different regimes of teaching  for students from the lower cycle.

The secondary classical regime (“régime secondaire classique”) is provided from 7e up to A-levels. For the technical education (“enseignement secondaire technique”) the school offers the lower cycle. Basically, there two different regimes of teaching: the “voie générale” (7eG-5eG) and the “voie de preparation” (7eP-5eP).

This organization of all the classes of the lower cycle within one school enables a natural and flexible passage from one regime to another within the lower cycle presupposed that there are still places available in the concerned class.

In the secondary classical education students in the second year (6e) choose between Latin and English. In the upper cycle (3e to 1e), they choose one section.

The following sections are offered at Lycée Aline Mayrisch:

For section F : Music and section I : Informatic pupils change school after 4e.

The high-school Aline Mayrisch offers three classes  in the lower cycle of the “enseignement secondaire générale”. This pedagogical approach consists of a progressive orientation over three years. A reduced but stable team of teachers accompany the pupils over three years. Revision work is planned to overcome any potential deficits the pupils have. A tutor lesson facilitates the management and supervision of the class as well as personalized support for each student. The independent work lesson « ANDers ARbeiten » (ANDAR) is one of the differentiated learning approaches intended for the ESG classes.

The Aline Mayrisch high-school offers 5eAD (5e d´adaptation) classes in “enseignement générale”, which mount students, who have learning difficulties and students from 6eP and 5eP classes which confirm the admission requirements.

The preparatory regime is made up of 3 classes:7e, 6e and 5e. The same team of teachers accompanies the pupils from the 7eP to 5eP in classes and workshops.

Pupils work in modules at their own speed.

During the school year the three classes of “5e ESG” undertake two work placements in order to gain their first experience in the professional world. This also enables teaching staff to guide them towards the most suitable apprenticeship at the end of the year.

Since September 2015, the Lycée Aline Mayrisch has been offering young people aged twelve to sixteen who completed their primary school and/or part of their secondary school education abroad a step-by-step integration into the traditional Luxembourgish school system.

The focus of the project is on intensive personal tutoring, which should enable the students to improve their proficiency in German or French respectively. Since the subjects in lower school (i.e. first to fourth form) are mainly taught in German, the offer for these year groups is designed especially for pupils who have difficulty with French. In upper school, students with deficiencies in German are supported since most classes are taught in French from fourth form (i.e. 4ème) onwards.

The aim of the project is to allow young people to make a transition to the traditional Luxembourgish school system after three years and thus to become multilingual. 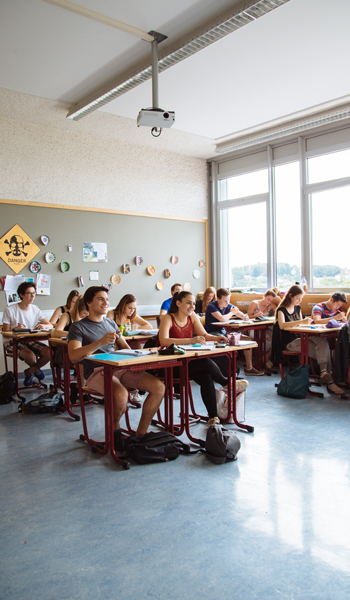