Since September 2015, the Lycée Aline Mayrisch has been offering young people aged twelve to sixteen who completed their primary school and/or part of their secondary school education abroad a step-by-step integration into the traditional Luxembourgish school system.

The focus of the project is on intensive personal tutoring, which should enable the students to improve their proficiency in German or French respectively. Since the subjects in lower-level secondary school (i.e. first to fourth grade) are mainly taught in German, the offer for these year groups is designed especially for pupils who have difficulty with French. Students of the upper level with deficiencies in German are supported since most classes are taught in French from fourth grade (i.e. 4ème) onward.

The aim of the project is to allow these young students to make a seamless transition to the traditional Luxembourgish school system in three years’ time and thus to become multilingual.

During the first year, and the beginning of this integration, the students are taught the language in which they still have insufficient skills for at least 5 to 6 hours weekly. The lessons are either conducted in groups (that is with other students from this project) or individually, with a language teacher.

During the remaining time, they attend regular classes, provided that their previous academic skills permit them to. They do not write tests; however, they will be subject to different evaluations (i.e., oral examinations). The focus lies on the core subject, mathematics, and the acquisition of additional languages.

At the beginning of the 2nd year, or throughout the 1st year, depending on their progress, the students are also integrated into regular classes in other subjects. As such, they are also occasionally given the opportunity to attend lessons in the language they are attempting to become proficient in. The individual lessons nevertheless continue to take place. From this moment onward, the students will by the decision of the school board be assessed in other subjects.

During the 3rd and final year of integration, the student will still be able to take advantage of personalised tutoring 2h/week, despite already having been completely integrated into their intended class and will participate in all standard testing. They will receive a report.

The individual lessons put emphasis on different skills such as free writing, listening, reading and speaking. The ‘‘labo-langues’’, a website created by teachers at the Lycée Aline Mayrisch, gives the students the opportunity to work autonomously in addition to their individual lessons.

During the integration stage, the students are regularly assessed in the language they are in the process of acquiring and are given written feedback, based on the criteria of the Common European Framework of Reference for Languages (CEFR), as well as of the Luxembourgish horaires et programmes. The decision regarding the definite admission to the regular classes is taken by the teachers of the respective classes and is certified with a report.

Once the students have successfully completed the integration stage, they are definitely admitted to the Luxembourgish school system according to their age group. In the case of failure, they can still attend a class with lower requirements.

A student’s admission depends on the quality of the portfolio they are required to hand in as well as on the number of places available. Candidates can register from May to July.

The portfolio must include the following:

The application must be addressed with the note ‘‘International student’’ to the headmistress of the school. 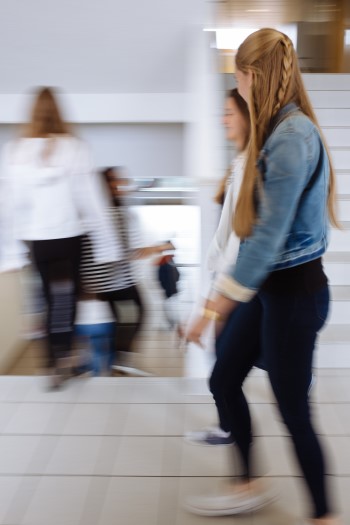